An unforgettable and timely dystopian story of a near-future, where Others and allies join forces against an oppressive regime

In a terrifyingly familiar near-future, with massive floods that lead to rampant homelessness and devastation, a government-sanctioned regime called the Boots seizes the opportunity to force communities of colour, the disabled and the LGBTQ+ into labour camps in the city of Toronto.

In the shadows, a new hero emerges. After his livelihood and the love of his life are taken away, Kay joins the resistance alongside Bahadur, a transmasculine refugee, and Firuzeh, a headstrong social worker. Guiding them in the use of weapons and close-quarters combat is Beck, a rogue army officer who helps them plan an uprising at a major internationally televised event.

With her signature prose, described by Booklist as “raw yet beautiful, disturbing yet hopeful,” Catherine Hernandez creates a vision of the future that is all the more terrifying because it is very possible. A cautionary tale filled with fierce and vibrant characters, Crosshairs explores the universal desire to thrive, to love and to be loved as your true self. 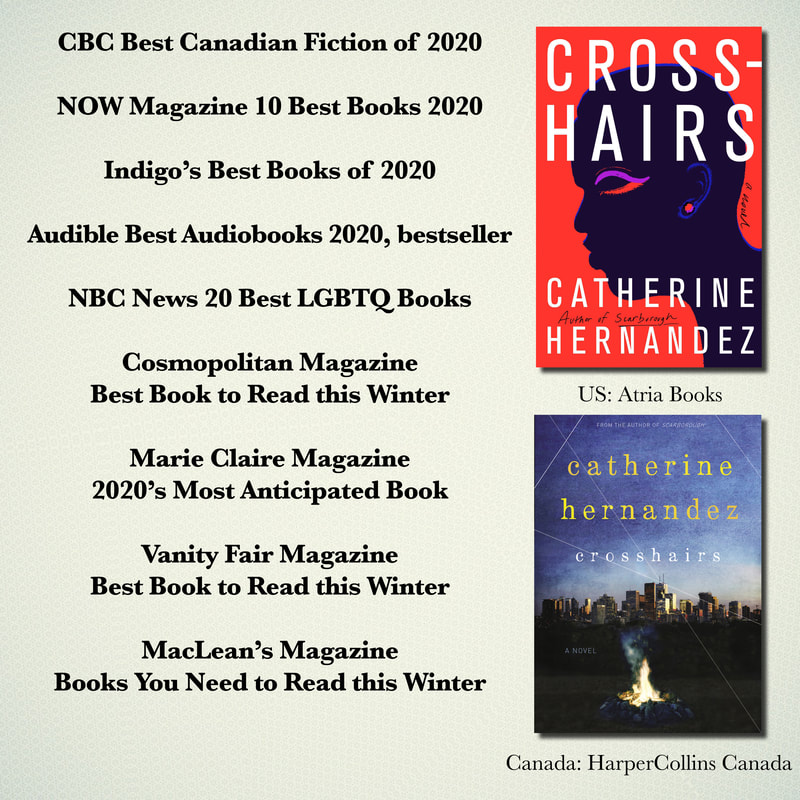 “Crosshairs made me shiver. It troubled my dreams. Still, I could not put down this dystopia. It was utterly compelling. Catherine Hernandez prophesies Canadian genocide against queer, Black, brown and Indigenous folks. At the same time, she inspires the reader with her depiction of a resistance full of characters who -- even in the face of hatred and complacency -- show love, pride, endurance, courage and who insist on living to the very last breath.”
– Lawrence Hill, bestselling author of The Illegal and The Book of Negroes

“Catherine Hernandez is ground-breaking. Her talent is remarkable. I dare you not to cry or scream or marvel or, like me, do all at once while reading this book. This story is a masterpiece of voice and metaphor, image and embodiment. But it is also a perfectly crafted portrait of us now, of us then, of the us we hope to be. [I love Catherine Hernandez -- her heart, her immense presence, her endless grace and her capacity for depth and light. And] I love this book, this big, bright missive that not only breaks the ground, but that gifts us with the steps to take in order to get to the other side, together.”
– Cherie Dimaline, bestselling author of The Marrow Thieves and Empire of Wild

“Crosshairs is blistering page-turner. One can describe it as dystopic fiction, but Catherine Hernandez is presenting us with something much more prescient to consider. The novel acts as a provocation and a challenge for readers to locate themselves. Crosshairs offers a glance into a world that is possible if we continue on a trajectory that is frightfully present. Most importantly, Crosshairs asks us what we will do to resist and build a better future when faced with such momentous and dangerous times”
– Carrianne Leung, award-winning author of That Time I Loved You

“In Crosshairs, Catherine Hernandez shapes a world at once fantastical and familiar, remarkable and relatable. This multilayered story captivates as Hernandez alternates between pressing firmly on readers’ exoskeletal fragilities and lightly stroking the places where empathy lives. The result is a sparkling but devastating novel about corporate and state cruelty, individual as well as community sacrifice, and queer Black and Brown kinship that must be protected at all costs. Timely, unapologetic, complicated.”
– Jenny Heijun Wills, award-winning author of Older Sister, Not Necessarily Related

"A beautiful, unapologetic, and unwatered-down burst of fury against cis white supremacy and tyrannical power systems, centered around a main cast that must be fiercely protected. Hernandez writes the best kind of Dystopian story, one that holds a sobering mirror up to our own world. Let this book haunt you.”
—Marie Lu, New York Times bestselling author of the Legend Series

"Crosshairs is both unnervingly prescient and undeniably profound. A harrowing work that's as much a battle cry as a ballad for the erased, and we should all be listening."
​--V.E. Schwab, NYT bestselling author of A DARKER SHADE OF MAGIC.

"Crosshairs leaves readers with two promises. The first is that change is possible. If people with privilege can be motivated to take action against systemic oppression, souls can be saved and lives can be spared. The second promise is that without change, we are hurtling toward disaster. Consider this book a call to action. A demand for change, before it is too late."
--Quill and Quire Review 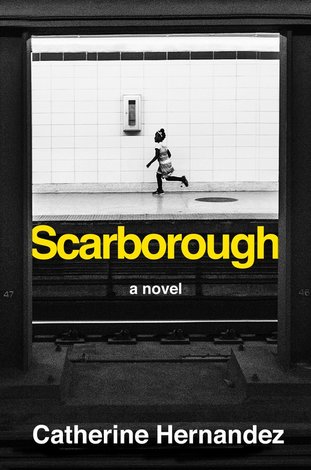 LISTED AS A "BEST OF 2017" BOOK BY GLOBE AND MAIL,
​NATIONAL POST, QUILL AND QUIRE


WHAT THE TORONTO BOOK AWARDS JURY SAID...
"Rooted from within the worldview and place it portrays, Scarborough is an intimate portrait of a community with all its nuances and desires deftly captured. Through this novel, Hernandez invites us to engage in both the subtle and the sharp, the ordinary and the extraordinary; which, at its best, is what Toronto is all about. Brick by brick, life by life, Scarborough delivers an orchestral impact, one small, beautiful voice at a time."

​Buy it here ARSENAL PULP PRESS.
​
Scarborough follows the lives of three children who inhabit Toronto’s low-income east end. Bing, who lives under the shadow of his father’s mental illness while his mother works tirelessly in a nearby nail salon. Sylvie, who, along with her family, rides the waves of the shelter system and the complications of special-needs education. And Laura, whose history of neglect with her mother is destined to repeat itself with her father.

A sense of community is built once a family reading program is established in the Kingston/Galloway area under the compassionate direction of childhood educator Ms. Hina. The program’s goal is to increase literacy on a provincial level. But amidst acute poverty and rampant drug use, Ms. Hina soon realizes the neighborhood’s people would be more interested in learning – if only they had full stomachs. Told over the course of an entire school year, Scarborough explores the positive impact of neighbourhood programming amongst Toronto’s poor and its devastation when the very governments who established these programs come and go.

"From the Rouge Hill waterfront via the 54 bus route, to the little strip mall on Lawson and Centennial to the National Thrift on Lawrence and Kingston, to the mural on the Warden Station underpass (Jamaican patty in hand), this is a town coloured by its people, brutal when it’s rough, comfortably home when it feels like it or when it doesn’t. And this is a story on the reckoning of privilege and the acceptance of difference. Simply put, it’s a lot."
-- Sadaf Ahsan, National Post

"From Ms Hina’s epistolary battle with her supervisor to the tragedy of an apartment fire, Scarborough is an engrossing read that’s a lot like its cover. Hernandez sets us running down that subway corridor, anxious for what comes around the next corner. Heartbreak, to be sure. But also unexpected joys and big lessons. Highly recommended."
--Jerry L. Wheeler, Out in Print

"Scarborough is raw yet beautiful, disturbing yet hopeful. And though it often feels relentless in its bleakness, it also gives voice to people whose stories are often unheard, making this an important book that deserves a wide audience."
— Kathy Sexton, Booklist

"Hernandez writes not from the vantage of 'them over there' but from 'us' and 'we'...
This is a crucial book for Toronto, and a shining example for writers concerned with the cultural tensions of the now.
--Jonathan Valelly, Broken Pencil

"This is a novel that will be rightly celebrated by folks in Scarborough and further afield. It’s a celebration of community, a sensitive and compassionate portrayal of how lives are irrevocably changed, moment by moment, through small acts of kindness or cruelty. It’s a novel that deserves to be read widely."
--Trevor Corkum, Hamilton Review of Books

Did you enjoy reading Scarborough? If you liked the book, pls share your thoughts on Goodreads. Review all of the authors you read here. Canadian authors depend on good reviews to sell their books!

Trailer for Scarborough: a novel from CEHernandez on Vimeo.

M is for Mustache: A Pride ABC Book

"D is for Doesn’t Matter.
Like, it doesn’t matter
where we came from or what
body parts we have,
we are beautiful." 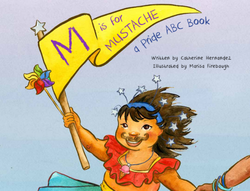 Inspired by Catherine's daughter's journey down Yonge Street as the wee tyke on a bike for the Dyke March in Toronto, readers learn about the Pride Marches in celebration of LGBTQ families.

Did you enjoy reading M is for Mustache? If you liked the book, pls share your thoughts on Goodreads. Review all of the authors you read here. Canadian authors depend on good reviews to sell their books!

Goodreads reviews for M is for Mustache